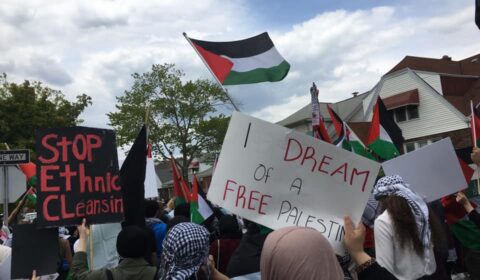 Like many other colonial projects, the establishment of the state of Israel started with the forced removal of the native population, an estimated 700,000 Palestinians in 1948. This was followed by an attempt to erase their history and culture, an event known to Palestinians as Al Nakba (The Catastrophe) [1]. Since then, the state of Israel has continued to defy international law both within its borders through the establishment of apartheid laws disadvantaging non-jewish citizens [2], and outside its border through the ongoing occupation and annexation of Palestinian land [3], an ongoing Nakba that continues to this day and is on full display in Sheikh Jarrah [4].

This ongoing violent campaign of dispossession and ethnic cleansing would not be possible without support from other colonial powers, chief among those, the United States who shares in both historical and contemporary injustices against our native population, and contributes billions of dollars annually in military aid to help support the occupation [5].

This support has been bipartisan and championed as supporting the Jewish community, which has historically been the target of massive injustice. Any resistance to this support has been smeared as anti-semetic but the truth is much more simple. In the words of our current commander in chief Joe Biden, “If there were not an Israel, we would have to invent one to make sure our interests were preserved.” [6] The United States supports these atrocities, not because it cares about the Jewish community, but to preserve our interests in the region.

Recognizing the role that international solidarity played in toppling apartheid in South Africa, in 2005, Palestinian civil society organizations put out a call to the international community to support the Palestinian cause by boycotting, divesting from and sanctioning the state of Israel until it complies with international law. The demands include the dismantling of the apartheid wall which resides mostly within Palestine and isolates communities. Ending racist and discriminatory laws within the state of Israel which privilege the Jewish population and disadvantage the native Palestinians, and allowing those who were forcibly expelled from their land to return [7].

The occupation of Palestine is not complicated. It is not a conflict, it is not a war, it is not a religious dispute over territory. It is an ongoing settler colonialist project predicated on ethnic cleansing which has used the real, historical and ongoing oppression of the Jewish community as a shield against criticism [8].  As an organization who believes in basic human rights, we stand in full support of the Palestinian call for the boycott, divestment and sanction of Israel, and we find it infuriating that this is presented as a debate. The merit of ethnic cleansing is not up for debate, the merit of apartheid is not up for debate. We additionally support the recent call by MSU student organizations of conscience, demanding the Michigan State University administration take a stance on this issue[9].

We are all complicit and we cannot be silent.

In love and solidarity, 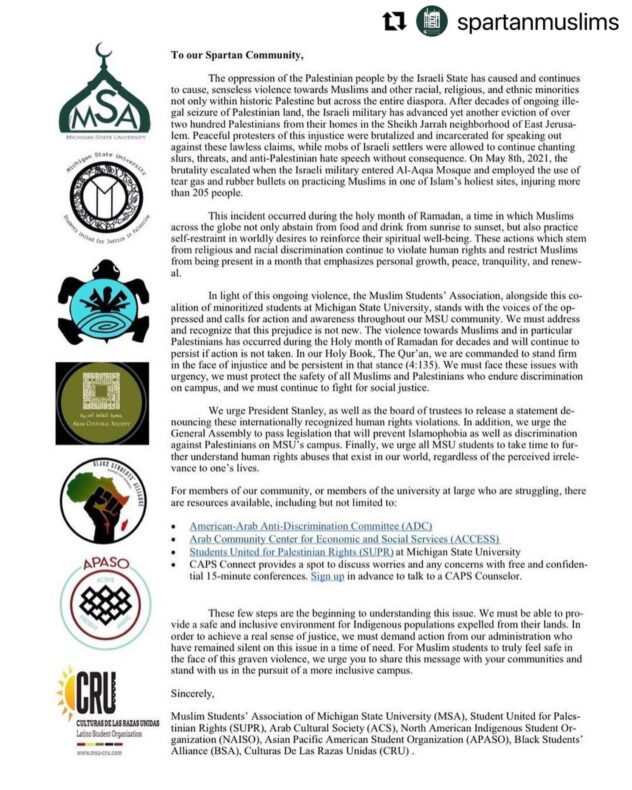